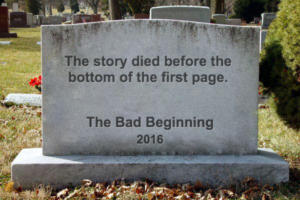 Last week I talked about writing conclusions (that don’t suck), so it only makes sense to tackle writing beginnings (that also don’t suck).

I watched a live slush panel at MileHiCon last year and saw the most depressing thing: one of the editors on the panel rejected a story after just three words. I could hear every writer in the room quietly mouthing, “Oh . . . my . . . god!”

This editor clearly had some buttons that could be pushed. I think the first three words were, “Rain fell steadily . . .” She raised her hand to reject the story based on her belief that you should never start with the weather. In the bar afterwards, some editors were laughing about it and offered their own quick rejects. They were tongue in cheek, but every tease has an element of truth.

“Tom woke . . .” Instant rejection based on just two words. Don’t begin with a character waking up.

“It was . . .”   Instant rejection also based on two words. Don’t begin with a pronoun without an antecedent followed by a linking verb.

I thought the editors were a pretty tough crowd. Three words or even two! But it does raise the questions, how long will an editor give you, how do you keep them reading, and what features mark crummy beginnings?

When I first edited, I read every story to the finish. My reasoning was mostly karmic: I wrote stories that I wanted to be read to the end, so therefore I read other writers’ submissions to the last page. This resolution lasted about a week. I began to reject stories that I hadn’t finished reading because nothing beyond where I quit reading would make me buy the story based on what I’d read so far. I have listed my bounce-worthy writing errors here.

Let’s assume, though, that the writer avoids the easy to fix errors, like using too many linking verbs or relying on clichés. What makes an effective beginning then?

I’ve come to believe the effective beginnings come first from the writer’s firm conception of the story’s ending. Think of it this way: when the scouts are gathered round the campfire, and the troop leader begins a story, she or he knows exactly where the story is going to finish. The beginning line isn’t setting up the next line or the first paragraph as much as it’s setting up the ending.

Along with that confidence about the ending is an utter belief that the story is worth telling. The troop leader knows absolutely that the story will be worth listening to, that the sad parts will be heart rending and the funny ones will elicit laughter and the tense ones will have everyone perched on the edge of their log, hanging onto every word. The beginning should reflect that confidence. The story plunges toward its ending. It doesn’t flail around for the first few pages like a drowning person unsure of the way to shore.

The very best beginnings dive in. The author doesn’t feel around in the dark for three pages. The live wires are on the surface in the first three lines.

So, how does that happen, the good beginning, I mean? The smart writers realize that they write at least two beginnings. The first one appears in the original rough draft. It’s written before the original ending has appeared on the page. By its nature, the first beginning can’t have the same confidence as the second beginning because even the outliners don’t completely know what happens in the story after that first page. Ideas change and evolve during composition. As soon as the first draft is done, the writer can now write the second beginning, hopefully the better one: the beginning that reflects the writer’s knowledge of where the story is going.

The dynamite beginning starts with the storyteller’s knowledge of the end. The storyteller knows, right from the first word that readers want to be hooked in; they need to be oriented in the scene, and they have to understand the characters and be intrigued by the situation. Good beginnings happen when the storyteller balances those needs—setting, character, situation and ending-driven prose—in the correct proportion for the story at hand.

Oh, and language, of course. The storyteller mixes those elements in the beginning.

By the way, I think knowing your best beginning will only appear after you’ve written your ending is an incredibly freeing idea. It means that you shouldn’t sweat your first beginning. You don’t need to know the perfect words to start. Just start the darned thing. Go ahead and flail around. It will be good for you. When you get better, you’ll realize your actual story began four-hundred words from where you started, or that the real beginning, the true one, is completely different from what you first wrote. That’s okay. That’s a part of the writing process.

Also, every once in a while, the perfect beginning shows up without a story to accompany it. Stephen King said he had the first line of the Dark Tower series before he knew the story: “The man in black fled across the desert, and the gunslinger followed.” J.R.R. Tolkien wrote in an empty spot on a paper he was grading, “In a hole in the ground there lived a hobbit.” He said, “Names always suggest a story in my mind; eventually I thought I’d better find out what hobbits are like.”

And here’s another also. The editor who rejected stories based on the first three words was an idiot. Great stories have begun with weather. They’ve begun with people waking up. A ton of really poor stories have started that way too, but a ton of bad stories have begun in all the other ways. Three words really aren’t enough to judge a story. But three sentences might be enough, and certainly three pages will tell any editor worth her salt whether she needs to continue reading.

Write the whole story first, then fix the beginning. When you’re done with that, fix everything else.