Sunday Writing: Every “Rule” has Exceptions 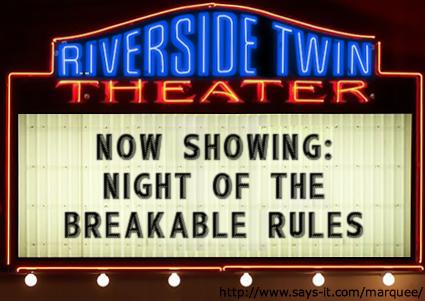 One of the many fascinating aspects of English and writing is that anything that sounds like a rule has exceptions.  The only real rule in writing is this: IT HAS TO WORK.  If it works, it’s good.  I’ve written stories in the past just to show that a “rule” can be broken.  My latest story at Daily Science Fiction does exactly that.  It’s called “Writing Advice.”

So, a lot of the standard wisdom writing teachers hand out is challengable, if you know what you are doing.

–    Write what you know.  This is intuitively wrong, or at least poorly stated.  I prefer “Don’t write what you don’t know,” because that implies you can find out stuff (and should).  Too vigorously applied, “write what you know,” produces a lot of belly button gazing.  At the college that means I get a ton of dorm stories, filled with drinking and teen angst.  Maybe an even better way to phrase this might be, “Write what you can imagine, and imagine with gusto (and detail).”  At least for science fiction and fantasy writers.

–   Don’t shift point of view.   In general, this is good advice.  A writer who slips around willy nilly with point of view just confuses the heck out of the reader.  I responded to a story the other day that dipped into the cat’s point of view for a sentence, and then, catastrophically, into a house plant on the fireplace mantle for another sentence.  The better advice, at least to stronger writers, is Control point of view.  If you know what you are doing, a story that shifts point of view can be the only way to tell the story, if it works.

For example, here is one of the most famous character introductions in all of English literature:

Oh!  But he was a tight-fisted hand at the grind-stone, Scrooge! a squeezing, wrenching, grasping, scraping, clutching, covetous, old sinner!  Hard and sharp as flint, from which no steel had ever struck out generous fire; secret, and self-contained, and solitary as an oyster.  The cold within him froze his old features, nipped his pointed nose, shriveled his cheek, stiffened his gait; made his eyes red, his thin lips blue and spoke out shrewdly in his grating voice.  A frosty rime was on his head, and on his eyebrows, and his wiry chin.  He carried his own low temperature always about with him; he iced his office in the dogdays; and didn’t thaw it one degree at Christmas.

External heat and cold had little influence on Scrooge.  No warmth could warm, no wintry weather chill him.  No wind that blew was bitterer than he, no falling snow was more intent upon its purpose, no pelting rain less open to entreaty.  Foul weather didn’t know where to have him.  The heaviest rain, and snow, and hail, and sleet, could boast of the advantage over him in only one respect.  They often “came down” handsomely, and Scrooge never did.

I think that nice bit of telling works, don’t you?  All right, it’s a bit of a cheat as an example, because there is some effective showing in there too, but the mode is mostly telling.  Look at how much milage Dickens gets out of mixing showing and telling.  Remember, too, that the very first time we see Scrooge in the story, his character is revealed through dialogue:

“A merry Christmas, uncle!  God save you!” cried a cheerful voice.  It was the voice of Scrooge’s nephew, who came upon him so quickly that this was the first intimation he had of his approach.

So, for me, the better advice is “Show, don’t tell, unless you earn the right to tell by doing a lot of showing.”  It doesn’t quite roll off the tongue as easily as the first piece of advice, but it seems closer to the truth.